This article appears in the September 2008 issue of Housetrends – Cincinnati

Bath design that stands the test of time

Monty Python once asked, “What have the Romans ever done for us?” For starters, the Romans have provided a model for great bathroom design. The beauty and luxury of ancient Roman bathhouses were marked by well-lit, airy rooms with high vaulted ceilings, lovely mosaics and multiple archways flanked by columns. Fashioned after the baths of classical antiquity, the style and magnificence of Roman baths are being adapted in today’s modern homes. Charlyn Jackson, of Neal’s Design-Remodel, recently had the opportunity to design a Roman-inspired bath for Mark and Michelle Fugate of Hamilton, Ohio. The remodeling project started with a large “generic” square room with a big closet. Part of the closet was removed to open up the area and add space. Mark and Michelle wanted to create a feeling of “fun with elegance,” and had the requirement that columns be incorporated into the room. Jackson ran with the column idea and began to develop a design that turned into a Roman bath.

To convey a feeling of the Roman bathhouses of olden days, Jackson incorporated ornate fixtures, an arched vanity and intricate designs in the tile. At the focal point is a grand bath surrounded by hand-gilded columns. Jackson chose rustic hanging light fixtures to add interest as well as to break up the large ceiling space. Recessed lighting over the vanity and in the soffit surrounding the tub provides important task lighting to help keep the space functional.

The Fugates’ beautiful bathroom does not seem out of place in the home. The remodel “was done in the Roman style of the rest of the home,” Michelle states. The project took about six months to complete. “It took a lot of planning and details. It was extremely expensive but we are very happy with it. It gets used every day. Our kids fight over using it. They even want their friends to see it,” laughs Michelle.

To complete the Roman feel, Michelle worked with a painter to customize the tiles with different Roman-themed illustrations. Inez Buchweitz, owner of Paint and Beyond, worked with the Fugates to complete the feeling of the Roman bath. Buchweitz antiqued the doors, ceilings, and columns with a custom-tinted concoction of five metallic glazes. On the walls, she added “breakaway” art. The five-step process was time-consuming but fit in with the classical theme by evoking a feeling that the art was just being discovered and uncovered.

First, Buchweitz applied a neutral color for the base coat. With the input of the homeowners, she chose the Renaissance art, enlarged it and applied a urethane finish. Cheesecloth was then irregularly applied to mimic the wrapping of an old piece of art and coated with the urethane finish. Finally, for the look of real stone, Buchweitz applied with a trowel a crushed stone product she special orders from Italy. To unify the theme, she spread the crushed stone product onto the woodwork so the wood tones would not seem obtrusive and out of place in the rest of the room. “It’s my value system to make my clients’ homes beautiful. I blended it together for the whole effect of stepping into a Roman bath,” says Buchweitz.

Suzy and Winston Faircloth of Cold Springs, Kentucky also have incorporated a Roman bathroom into their home. The idea for the Faircloth bath started in much the same way as the Fugate bath. Suzy, an interior decorator and owner of Polished Panache, says, “It’s about the style I like. I like the look of columns and arches.” As soon as you step into the bath, you are welcomed by an overall feeling of spaciousness thanks to the large room, high ceilings, and beveled-glass picture windows.

The coup de grâce of the Faircloth bath is the soaking tub. Surrounded by tile, glowing amber sconces and a fireplace topped with a stately ornate mantel, you are transported back in time as the water cascades out of the antique brass fixture.

Suzy designed the bathroom and did much of the labor herself, including the extensive tile work and the faux painting on the walls. Suzy used a technique where she applied a drywall compound over a raised stencil, sanded it to take out peaks, cleaned the stencils and made a second application of the drywall compound. She then sanded again, applied tissue paper, and followed up with a coat of paint and glaze. The painting project was labor intensive but worth the end result.

Taking ordinary but necessary items that often get overlooked, Suzy transformed them into unexpected pleasantries so that they did not fight the overall feeling of the room. An everyday make-up mirror became a work of art with the help of Suzy’s faux painting expertise, and recessed lighting was accentuated with dangling beadwork compliments of Suzy’s cleverness. “I like the open airiness of the room and all of the natural light,” Suzy says.

In creating a Roman-style bathroom, tiles that look like stone, faux or painted columns and a raised ceiling are necessary features. “High ceilings are almost necessary. It would be very difficult to do a Roman bath with a shorter ceiling,” Jackson said.

Roman baths are of a design style that stands the test of time. So do as the Romans and create an open, airy bath filled with beautiful tile and columns, and you will be guaranteed to be transported back to a timeless treasure. 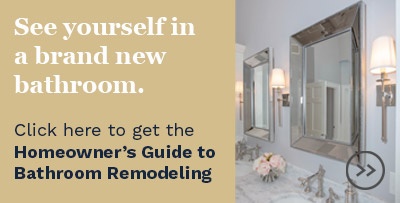